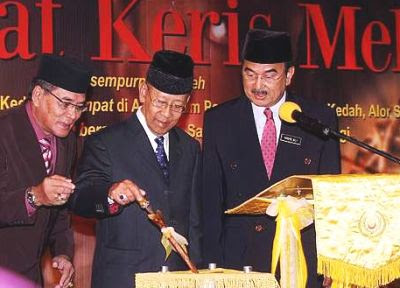 Steeped in tradition: Sultan of Kedah Sultan Abdul Halim Mu’ad­zam Shah putting a keris into its sheath to officially launch the ‘Semangat Keris Melayu’ book at the auditorium of the state public library at Jalan Kolam Air in Alor Setar yesterday.

The book, written by Emil Bahari, is being sold at RM25 per copy. An exhibition on keris was also held at the library.

Congratulations to my old university-mate, Emil Azril Bahari for his coup de grace in publishing this long awaited book. At least I know my copy will be an autographed one.