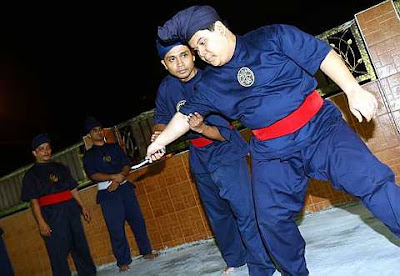 Silat has been a part of Tuan Faisal Azmy Tuan Kob’s life for the past nine years. At least twice a week, he makes his way to his Seni Silat Cekak Ustaz Hanafi centre in Subang Jaya, Selangor, where he conducts silat classes.

Faisal, a 29-year-old engineer, first took up silat when he was studying in Multimedia University. Silat, a Malay martial arts form that comes in hundreds of different styles, is a graceful method of self-defense made up of numerous stances and footwork.

“I was the last in my circle of friends to join the club actually,” says Faisal. “Most of my friends were taking it up and it grew on me. Ironically, now I’m the only one left who is still involved in it.”

Faisal even put up a silat performance when he was studying in Manchester, Britain.

“Coincidentally, it was Malaysia’s 50th year of independence at the time, and I was invited to give a silat performance during the celebration,” recalls Faisal.

The Kelantan native, who is also active in theatre, is serious about preserving the art form and passing it on to the younger generation.

Tuan Faisal Azmy Tuan Kob believes in preserving culture, and he is doing so through Silat, an art which he hopes to pass on to his children someday.

“If we don’t keep culture alive, it will be lost.”

Faisal also thinks it ironic that it is he, the most urbanite in his family, who is practising the ancient art form.

“It’s funny how my family is the one that moved to Kuala Lumpur, while my parents’ siblings and their families remain in Kelantan. And I’m the one taking up this traditional art,” he explains.

Silat, he says, humbles him. Once he walks through the doors to his class, everything that separates him from his fellow martial artists in status and rank is shed away, and everyone is equal.

“In my class, there could be rich kids or farmers, but we’re all the same at that moment in time. Being a part of something like this unifies people. We learn mutual respect and this is what we need to uphold in our society; it’s not just about having knowledge about the moves and stunts.”

Faisal says that apart from the physical benefits of performing silat, the art is built on pillars of beliefs, all to do with respect.

“This is why I will teach my children silat because it teaches you to respect your teacher, parents, and others. It teaches you to uphold good values, apart from knowing self-defense,” notes Faisal.

He believes that young people should stay in touch with their heritage, in any way possible.

“It’s about having a cultural identity in our society. If we don’t keep it alive, we’ll lose what contributed to making us what we are today.”

Posted by Mohd Nadzrin Wahab at 11:41 AM