The Art of Silat

Pencak Silat is a self-defense or martial art that has attracted enthusiasts including youths. To the younger generation, the art is a cultural heritage to promote the malay traditional art of silat. 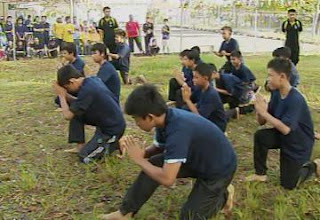 In this modern era, the traditional martial art of silat need to be preserved as a legacy for future generations. The younger generation must be exposed to this art to prevent it from becoming extinct. A 'seni bela diri belia' or youth martial art project was launched at the Kampong Perpindahan Mata-Mata Mosque in Gadong. The launch was officiated by the Permanent Secretary at the Ministry of Religious Affairs, Awang Haji Abdul Aziz. According to the Main Instructor of the project, Awang Haji Ibrahim bin Haji Mohamad Yussof, the at takwa arena was established in February 2010. It has about 40 members made up of youths aged between 8 to 18, and 6 coaches from 41 silat first class, to train the mosque's youths and to develop the youth movement at the mosque.
Silat helps the practitioner to defend himself and it also contains useful knowledge toward developing a caring community. The art of self-defense is one of the nation's highly valuable heritage that can teach its members discipline in placing importance on moral aspects of daily life.
Sourced from http://www.rtbnews.rtb.gov.bn/?c=newsDetail&news_id=16478
Posted by Mohd Nadzrin Wahab at 2:05 PM

Email ThisBlogThis!Share to TwitterShare to FacebookShare to Pinterest
Labels: Brunei