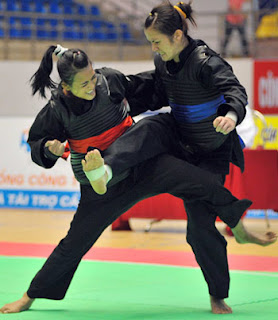 VietNamNet Bridge – The national pencak silat team is about to group up to prepare for the Southeast Asian Games and other international competitions but athletes don’t want to join the team.

Hong Ngoan, who has won many medals at regional and world competitions, has said goodbye to pencak silat though she is still one of the best athletes, with good health and superior technique.

Huynh Thi Thu Hong and Nguyen Thi Phuong Thuy - SEA Games current champions – will not enter the national team because they are getting married. Other champions like Nguyen Viet Anh and Nguyen Thanh Quyen have refused to join the team for studies.

Last year, when the national pencak silat team convened to prepare for the world championship, two senior coaches Xuan Hai and The Lam refused to join the team. However, Vietnam didn’t lack good coaches so the team still had their coaches and won the championship.

Both coaches and athletes don’t want to play for the national team because of the following reasons.

Firstly, the investment policy for pencak silat has changed. Previously, when Vietnam aimed at the SEA Games, pencak silat was a key sport and pencak silat athletes were always welcomed home as heroes after regional and international competitions.

At the SEA Games 1999, Vietnamese pencak silat athletes won seven gold medals, accounting for more than 40 percent of the gold medals of the Vietnamese sports delegation.

In that golden time, pencak silat athletes were always honored by the media and nominated as the country’s 10 best athletes of the year.

In recent years, though they won the world championship and gold medals at SEA Games, pencak silat athletes were not named in selections of the best athletes of the year.

Pencak silat is on the wane because Vietnam now focuses investment in sports for the Asian Games and the Olympics, not the SEA Games.

This year, the funding for pencak silat is equivalent to nearly one third of that for track-and-field while the number of medals won by pencak silat is high. Vietnam has registered only several international pencak silat tournaments this year.

Pencak silat athletes have to practice very hard and always face injuries but their income is low. Though they play well, they are not highly appreciated. As a result, athletes don’t want to play for the national team.

Vietnam still aims to enter the top three of the SEA Games from now to 2020 but if it doesn’t invest properly in pencak silat, it may fail to achieve that goal.
Posted by Mohd Nadzrin Wahab at 3:19 PM

Email ThisBlogThis!Share to TwitterShare to FacebookShare to Pinterest
Labels: News

Heavy news this, sad and somewhat tragic that despite the fact that the athletes and coaches pouring their hearts into it, they are not getting the recognition in their own home that they so deserve.

I understand that getting government funds can and is hard, but perhaps a cross-gevermental effort could be done for the sport? I imagine this is what the lot of silat exponents are fighting for, and with enough of you to push the thing through, hopefully private funds from sponsors and such would start to come in.

What the Viet Namese government is doing actually makes sense from a long term plan point of view, plus there is no emotional nor racial attachment to the sport, other than a stepping stone to greater things.

What's sadder is that, while the Viet Namese athletes are crying out for more help, Malaysia athletes are not all as excited about it themselves. I don't blame them, because not all of us have bought into the concept of a sport silat.

I'm not a proponent of sport, myself not having any experience in any sport, but I would hate to see something worked so hard on, just for it to disappear.