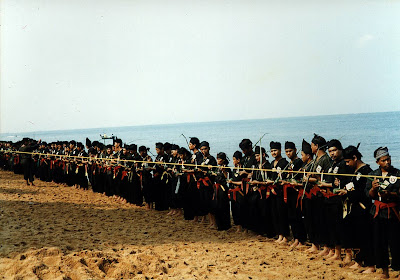 Silat Seni Gayong practitioners undergoing a khatam keris ceremony on the beach.
In 2003, I joined a journalistic excursion with SENI BELADIRI magazine to the beautiful state of Kelantan. We were there to interview guru Pak Su Noor of Silat Terlak Empat and guru Awi of Silat Jawi. The group we assembled were all Silat Melayu Keris Lok 9 practitioners who studied with guru Azlan Ghanie, also the magazine's publisher.

Although we spent our first night there at a hotel, we later decided on staying at a beachside dorm at Pantai Cahaya Bulan (formerly Pantai Cinta Berahi), better known as PCB. Being a group of silat-mad practitioners, it wasn't long before someone suggested we practice some forms on the beach under the moonlight.

We decided not to practice close to shore, where the sand was packed hard by the water, but further up the incline, where the sand was loose. It was an amazing experience. Moonlight sparring was very different. The sand kept moving under our feet and made it difficult to keep mobile. Practicing arts that depend heavily on footwork means that the more you move, you more energy the sand saps away from you.

Soon enough, our feet started hurting badly. It dawned on us that this was probably why beach training was such an important aspect of silat to those masters who had access to it in the past. If you want to put power into your legs, but can't pay for a personal trainer nor a gym membership, a sandy beach is probably your cheapest option. Oh, if you're doing this in Malaysia, keep a can of bug spray handy.

Although all of us were studying Lok 9 at the time, we were blessed by having members who had varied backgrounds in the arts. There were practitioners of Cimande, Gayong, Cekak, Sendeng, Lincah, Gayong Maarifat and who knows what else.

Thus, after we got bored of doing Lok 9 forms, we began taking turns leading the group, doing forms from various different styles. Combat-wise, I suddenly appreciated the simple buah of Silat Cekak Hanafi and Silat Kuntau Tekpi. You lost a lot less energy by not evading too much.

But I have to say, if strong legs is what you want to get out of your free beach training, Sendeng forms have got to be the toughest. It's bad enough to have to constantly balance on a single-line fencing-style low stance, but you have to shuffle instead of step, and that takes smooth balance transfer. The worst parts are the kicks, which are delivered from those same low stances.

You can imagine then, my horror when I read in the news recently that the Asian Beach Games, first ever to be held in Bali, is actually going to happen. What started out in my mind as a laughable event became a serious undertaking, with several countries committing athletes, including Malaysian and, of course, Vietnam.

I'm not laughing anymore, and I regret I ever did.

To all the athletes who will face each other on the hot, burning, shifting sands of Bali, I envy you not. This will be the toughest test ever for your skills. Make us proud and any medals you bring home will be well deserved. Then, and only then can you kick off your shoes and soak your feet into a tub of hot water for the next couple of weeks. Good luck!

The Beach Pencak Silat event will be held from the 18th to 21st and 23rd October 2008. For more information, click here.