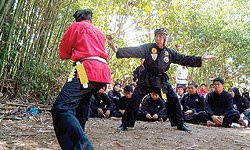 Silat and the Melayu world are synonymous. From centuries 'Silat' has existed acting as a symbol of Melayu cultural heritage.

It is similar to Perguruan Seni Pencak Silat Gerak 41 that has already been established for more than 20 years now and it's still standing strong while preserving the culture and the four Melayu indigenous martial arts in Brunei. 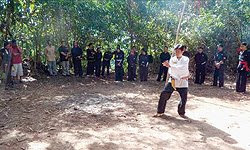 In the beginning it was started by two teachers followed by 10 teachers and the number has increased to thousands of martial artistes (Pesilat) from 10 different branches of PSPSG 41 throughout the country. Today, G41 has more than 40 trainers, 7 pre-instructors, 3 instructors, 1 mentor and 2 prime mentor. 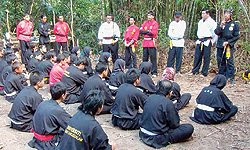 It was conducted to assess and test the achievements, skills and techniques integration and applications based on PSPSG 41 martial art curriculum and scheme. The assessment was done by the PSPSG 41 Dewan Jurulatih and Dewan Guru. 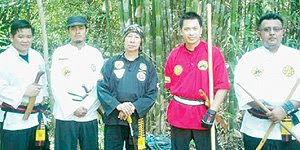 Three tests was done, first test was the close range combat technique (Tempur Tangan Kosong). This test is conducted to asses the skill, techniques, strength and agility in each pesilat before they can move on to the primary level and secondary level.

The second test was the primary level where each 'pesilat' creativity, skills and techniques using blunt weapons like the Tambong, the Tambong Dua and Selendang are tested.

In this assessment each 'pesilat' using their own creation are required to defend him/herself as well as to attack and defeat the opponent.

The last assessment was in the secondary level (Sharp Weapon Technique). 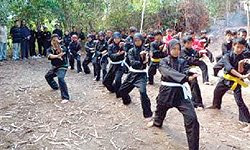 This is a level to determine if the 'pesilat' is qualified to hold the red belt then move on to the Pre-Instructor level of a green belt.

The third assessment is more challenging where the 'pesilat' is needed to show their skills, techniques, creativity, agility, strength and speed in using sharp weapons like The 'Keris', a knife, a 'kerambit' and a sword in combat to defend and attack an opponet. The 'pesilat' level of instinct, the use of our five senses and reflex actions are also tested. 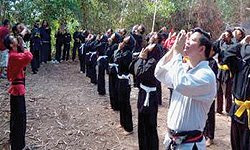 ho took part in UKA are assessed by G41 Pre-Instructor, Instructor and Mentor. UKA was held not only to assess each 'pesilat' but it also enhanced the rapport and relationship among 'pesilat' from different G41 branches. At the same time the activity also functioned as a creative learning process and positive moral values to youth inside G41.

Hopefully, through this activity, G41 can actively contribute and help develop our country to teach youth some dicipline, self-confidence, positive attitudes based on MIB through the martial arts priciples and dicipline.

Posted by Mohd Nadzrin Wahab at 11:04 AM

This is a great article.

(Wow..talk about Silat 'Procedures' and 'Modules')

The part I really like is the test of the 5 senses and reflex action.