‘Silat sendeng’ is now the official martial art of Johor 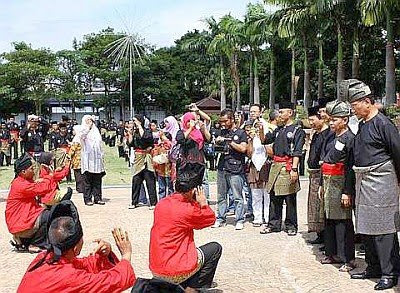 TANGKAK: Johor has adopted silat sendeng as its official martial arts in a move to promote self-defence, discipline and healthy living among the people.

Speaking to some 1,000 silat sendeng exponents from throughout Johor and Malacca, he said silat sendeng grandmaster, the late Long Mamat, was born in Sungai Mati.

“From the descendants of Long Mamat we have Ahmad Nazari Abdul Hamid who is now the president of Johor’s Malaysia Silat Sendeng Organisation,” he said at the launching of silat sendeng as the states’ official martial arts on Saturday.

Abdul Ghani said the state government, through its Heritage Foundation, would promote silat sendeng in all parts of Johor and other states soon.

He said the foundation would be allocated funds to form units at the district level and to engage trainers, both full-time and part-time, and every district would be directed to set up a silat sendeng group.

District officers, he said, must encourage villages to set up their own silat sendeng groups and they could use the compounds of the penghulu complexes to train.

Abdul Ghani, who is the patron of the Johor Silat Sendeng Organisation, was later presented with a book on silat written by Kamdi Kamil of the Johor Heritage Foundation.

The book is about the history of silat sendeng and contains interviews with several descendants of Long Mamat.

It also has illustrations of the silat’s many moves.

other states should follow suit such as silat from kedah [cekak, kalimah, kalam] and from perak [seni gayong].