PETRINA JO FERNANDEZ learns how weapons form the core of silat, the Malay martial arts that is the subject of an award-winning documentary.

THE documentary Inside Silat — Weapons of Destruction, a documentary by silat gurus Jak Othman and Ed Chard, created quite a buzz in the local film industry.

One of the most talked-about entries at the recent 2009 Malaysian Documentary Awards Festival, the hour-long documentary captures the spirit of the martial arts world, taking viewers on a roller coaster ride of amazing feats.

The first such festival, held last week in Kuala Lumpur, saw some 100 documentaries competing for 10 awards, including four major and five minor categories. 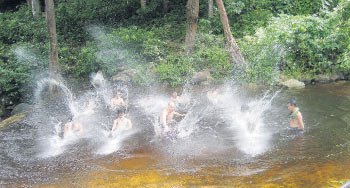 The major award winners took home RM5,000 in prize money and a trophy each, while the minor awards winners each received RM3,000 and a trophy.

Now the four winners of the major awards are in the running for the Best Documentary award at the upcoming 22nd Malaysian Film Festival to be held in Kota Kinabalu from today until Saturday.

Directed and produced by Jak, said to be a world authority on martial arts, Inside Silat was nominated for six of the nine categories and took home two awards — the Best Editing and Best Arts and Culture awards.

It was one of only two documentaries to secure more than one award at the festival; Bumi Peribumi bagged the Best Director and the Best Environment and Tourism Documentary awards.

Life and Times speaks with Jak about his recent wins and the producing of Inside Silat.

About Inside Silat
Choosing a storyline to demonstrate the inside world of silat was easy — we just looked at the history of the art and found our story.

In ancient times, when a senior student was ready, his teacher sent him away from the gelanggang to study other styles of silat.

This journey, known as the “path of the pendekar”, helped enhance the student’s understanding of the skills he had mastered.

I play the teacher Guru Jak Othman, and Guru Ed Chard, who helped me put together this documentary, plays my student. (Chard also hosts the programme).

In the story, Ed who has been a student of mine for 23 years, gets sent on the “path” across Malaysia.

It is a journey that involves weapons training, including using the keris, kerambit, sarong (yes, the sarong!) and tekpi, and a series of tests.

On the importance of the documentary 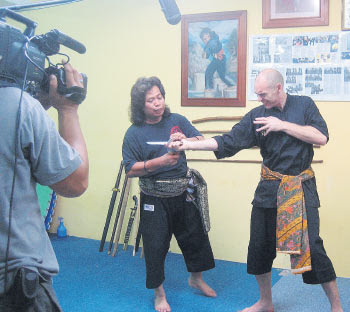 The documentary addressed the local and Western perspectives on silat. Chard (right) is seen here with Jak.

It takes a look at what silat is all about.

There are two perspectives of silat, a local one and a Western view.

Young Malaysian martial arts practitioners sometimes reject this fighting system, labelling it “rural”, “outdated” and “old school”. And yet these very characteristics are why the art is so revered by the West.

Westerners feel that the art’s kampung roots reflect how it evolved as a matter of life and death.

It’s not a competition; there are no medals or points to score. In a fight, it’s your life or his. And this is the philosophy that lies at the very heart of silat: it’s kill or be killed. That’s why weapons are the core focus of this documentary.

In making the documentary, I tried to address both the local and Western takes on silat.

It shows Malaysians that there is far more to the art than just a ceremonial display while educating an international audience on the art’s fighting styles.

On winning Best Editor and Best Arts and Culture awards
I am very honoured. I especially would like to thank Finas (Malaysian National Film Devlopment Corporation) for funding Inside Silat.

The documentary is ground-breaking from a martial arts stance. Never before has a documentary revealed so much about martial arts training and its many masters. I hope Inside Silat will become a huge hit with the public and generate a cult following in the martial arts world.

On his interest in film production
I’ve been interested in film ever since I can remember, but even as a child, it was never about being in front of the camera.

Sometimes I think it’s because my creativity is balanced by a more practical side, or the fact that I’m a perfectionist. Being behind the camera gives me more control on how the film turns out.

On the challenges faced by independent filmmakers in Malaysia
The hardest part is breaking into the industry, but the fact that talent and hard work, and not who you know, carries you through makes film a great industry to work in.

No matter how creative you are, limited funds for local filmmakers result in the local version looking cheaper than its international equivalent.

A good example is Human Weapon, the most popular martial arts documentary. The show has very little content but it’s still a great-looking product. That’s thanks to an arsenal of very expensive special effects and CGIs, plus a travel budget that took the crew across the whole of Asia.

On how film festivals open doors for independent producers
As I mentioned earlier, international recognition is a huge obstacle for local producers.

The condition for entering a documentary in the Malaysian Documentary Awards Festival was that it had to be a “Malaysian production”.

This definition allowed internationally-acclaimed executive producers and directors to qualify, which meant the competition was incredibly tough. There were entries from established channels such as National Geographic, Discovery channel and Astro.

Being able to rise to the occasion enabled me to show the quality of my work, so I hope this type of recognition will allow my filmmaking to break into more international markets.

On the late Yasmin Ahmad
I have always loved and enjoyed her work. She was bold and she addressed delicate and sensitive issues that needed to be talked about such as interracial relationships and religion.

On his current works
I’m involved in a number of projects concerning sports, food and martial arts. The one with the biggest potential, which I am most excited about, is a martial arts-meets-game show-project, but it’s still in the works. If I get it off the ground, it’s a real must-see TV show.

Ed Chard says
I first met and started training under Jak at Surrey University in England. Then 15 years ago, I emigrated to Sydney, Australia.

At this stage, Jak had returned to Malaysia. On the way to London to visit my family, I often stopped off in Kuala Lumpur to continue training with Jak.

Then, about two years ago, we started talking about making this documentary. The original plan was for me to fly out from Sydney on holiday for the shoot.

But at the same time Jak was getting close to securing funding from Finas, I was offered a job in KL!

So in October last year, I moved to KL. And six weeks later, I used my weekends to shoot Inside Silat.