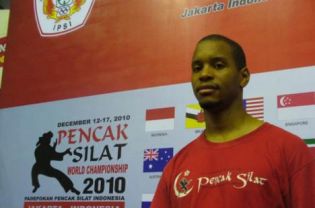 American Abdul-Malik Ahmad had never heard of pencak silat when his friend introduced him to the martial art at their local mosque in Washington, DC.
Now he fights in competitions all over the world and plans to promote the sport back home in the United States.
We caught up with Abdul-Malik at the 14th Pencak Silat World Championship in Jakarta last week to find out what it’s like to be the only American in the competition, why he’s hooked on Indonesia’s traditional martial art and how to keep your sarong on in a fight.

How long have you been doing pencak silat?
The actual pencak silat I’ve been doing for about 20 years, since I was 15. I’m 35 now. But the sport aspect of pencak silat, which I’m here to learn, this is my first time.

So I came here and was participating in two divisions: The tanding , the fighting, and tunggal , the single form. So that was fun.

I’m surprised there aren’t more Americans here.
Me too! My goal is to go back and really promote pencak silat more and hopefully, by the next competition, we’ll be able to bring maybe a dozen people from the United States.

What do you like about Jakarta?
Jakarta seems like a very active place — a lot of diversity. People are nice and hardworking. I’m not really into big cities, but I like Jakarta. The weather is great, the food is great. It has a good spirit to it.

What do you dislike about Jakarta?
The bad thing obviously is the traffic. I think it could be a little cleaner, but that’s all big cities. I’ve been to New York, to Cairo, to Dhaka, which is in Bangladesh. I’ve been to several real big hustle-and-bustle cities, and they all have a similar vibe. Jakarta is no different.

What is it like to practice pencak silat in the country where it originated?
Oh, it’s great. That’s why I’m back. It’s authentic. I’ve been doing pencak silat for 20 years in America, but coming over here, you get to see what the art really means to the people.

How did you first get started in pencak silat?
Actually, [in Washington, DC] there’s a local mosque and there was a friend who invited me to go to this silat class. I didn’t really know what silat was, I hadn’t heard of it before. But then I was interested in it and I really enjoyed it. It was a great school and he was a great instructor too. So I just kept with it and when that class finished, I went to the Indonesian embassy in DC and I continued my practice there.

It’s much different. The rules are: No sweeps or takedowns, just punches and kicks. So I just use the aspects of silat that I know are similar and I leave out the other aspects.

What’s it like to be the only American athlete here?
Well, actually, everyone is very nice here. I got a warm welcome from the South African team because we shared the same silat school. Everybody’s been very nice and I’ve really been enjoying myself.

And you’re also an instructor?
I am. I’m officially a black belt, or pelatih [trainer] as they say, so I do instruct. I’ve been teaching for about 10 years. We have about 60 students right now in our school. Most are young, around 9 and younger. We’re trying.
Is this your first time in Indonesia?
This is my second time in Indonesia. The first time was in December 2008 for about two weeks. I stayed with a friend of mine just a bit outside of Jakarta. But we practiced in Jakarta at Al Azhar Indonesia University, which was right in the middle of the city.
How did you do in the competition this week?
Oh, I didn’t win. I got beat by Malaysia. Everyone said I did well, but — I had a wardrobe mishap. So my sarong fell off and that’s, like, 20 points. But I enjoyed myself and I took some video and it was a great learning experience. I think next time I can do pretty well.

Written by JENNIFER JETT
Sourced from http://www.thejakartaglobe.com/myjakarta/my-jakarta-adbul-malik-ahmad-pencak-silat-athlete/412754
Posted by Mohd Nadzrin Wahab at 9:36 AM

it would be nice to be able to see his videos, in action!