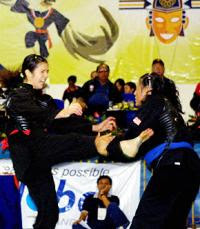 Nhan Dan - After five years of anticipation, Thanh Hoa team has occupied the first position at the National Pencak Silat Championship 2009, concluded in Nghe An on April 7.

Posted by Mohd Nadzrin Wahab at 9:25 AM