A tribute to silat 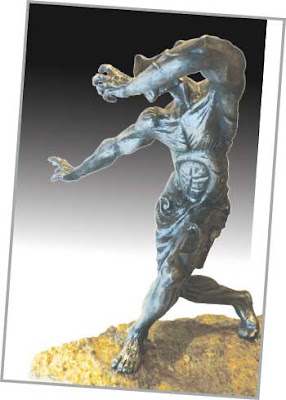 There is nothing more satisfying than doing something one is passionate about.
For Mat Ali Mat Som, who has a passion for everything about silat – a traditional martial art of the Melayu archipelago – being able to share it is a satisfaction he cannot describe in words.
Not only has he learnt the martial art, and studied its history and moves, he is now sharing his sculptures based on the art. 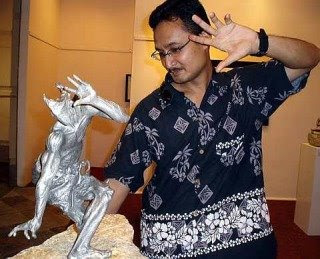 Artist and his work: Mat Ali imitating the silat move featured in his sculpture entitled
`Pipit Patah Sayap’, which is on display at Metro Fine Art Gallery.
The artist is currently holding a solo exhibition at Metro Fine Art Gallery, in Legend Hotel until April 18.
Entitled Dendam Tak Sudah (Neverending Grudge), the show features 21 pieces of his metal sculptures created in the past two years.
In addition to the sculptures, the exhibition also features drawings and sketches of the keris series for this exhibition.
According to Mat Ali, the keris is both symbolic and a weapon for silat. The techniques and styles used for the sculptures are similar to the art of keris-making.
For the 34-year old artist, it all started with the keris.
“I remember making my first metal sculpture – a keris – after watching a television documentary on the keris when I was 10 years old.
“I made the keris using an iron pipe in the garage of my parents’ home in Ampang. 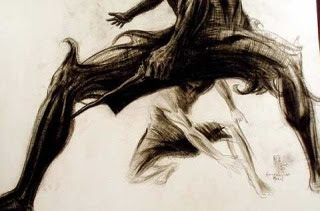 Preliminary work: Sketches and drawings help the artist in his study of silat formations,
especially in capturing the details of the muscles in each move. This sketch was done using charcoal on canvas.
“Throughout the years, I have felt an excitement when I see the metal starting to take shape and becoming what I wanted it to be – just like when I was 10,” said the father of three.
According to Mat Ali, he chose the Melayu expression Dendam Tak Sudah to symbolise the endless struggle and burning desire to achieve one’s ambitions, or even simply to resolve conflict. He said it was not meant to imply violence as some might have thought.
He also explained that the term was no stranger in the Melayu heritage as it was also the name for the a tengkolok folding style.
“The basic silat philosophy is to forgive and not hurry to punish.
“The expression takes on the meaning of mystical artistic passion behind the fluid movements of this particular form of self-defence,” he said.
With titles such as Di Hulu Berkawan di Hilir Berlawan, Setiap Langkah Rahsia Setiap Serangan Mengena, Gerak Kilat Elak Jika Sempat, Sepu Sendi and Anak Harimau, these works show in detail and without any awkwardness, the steps and formations in the martial art.
To produce the sculptures, Mat Ali, who is a silat practitioner himself, started with photographs, which he later transformed into sketches to incorporate his own ideas on the image. 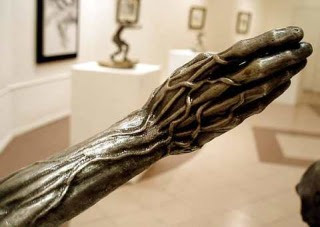 Eye for detail: The artist has a fascination for details, not only concerning the silat moves
but also in the muscle movements and bulging veins, as in this sculpture.
Then he would add the details before producing a master sculpture using clay.
“I have to make a mould of the piece, into which I would later pour the molten metals to produce the sculpture.
“It is always a surprise to see how it looks when I open the mould,” said Mat Ali, who operates from his home in Johor.
Looking at the works, one will see minute details, from the keris to the life-like muscles and veins.
The muscles and bulging veins, especially on the hands and feet of the sculptures, evoke the impression that the silat practitioner is in a rage, or is anticipating something and ready to make his move.
Mat Ali said each piece took him about a month to complete. Metals such as tin, aluminium, zinc, iron, steel and various other alloys, were melted and then moulded into the shape that he wanted.
He said differences in the metal combinations used, temperature of casting and polishing produced different colours and textures in the sculptures.
Using more brass, for example, would give rise to lighter colours, compared with iron.
The recent hikes in the prices of metals had also affected his work production.
“I need at least RM5,000 just to get the metals for each piece of work, and that does not include all the creativity, effort and time spent,” he said, adding that the artworks, measuring about 30cm (one foot) each, were priced at an average of RM12,000. each.
Metro Fine Art is located on the ground floor, Legend Hotel, Jalan Putra, Kuala Lumpur, and is open from 11.30am to 5pm (Mondays to Fridays) and from 11am to 4pm on Saturdays. For details, call the gallery at 03-4042 2224.
Sourced from http://thestar.com.my/metro/story.asp?file=/2009/4/16/central/3701908&sec=central
Posted by Mohd Nadzrin Wahab at 9:07 PM

Email ThisBlogThis!Share to TwitterShare to FacebookShare to Pinterest
Labels: Announcement

slmkm... hello friend..follow me and i follow u back
ditempat saye ada cerita tentang silat Pangean....