Joel Champ: Taking Gayong to the US Navy 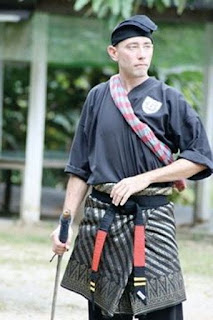 Standing guard over the Academy, he maintains justice with his vigilant watch. Mastering the art of Silat Seni Gayong, a Malaysian martial art, and according to him, he is the highest ranked fighter in the western hemisphere. While this could possibly sound like the plot for the next big action movie, it’s a reality for a local Annapolis Sailor.

Master-at-Arms 2nd Class Joel Champ, assigned to Naval Support Activity Annapolis, visited Malaysia over the winter while on leave for two weeks to meet and train and fight with the highest ranking members of his discipline, Silat Seni Gayong. His journey was also the subject of a documentary airing on the National Geographic channel in early September.

‘‘It’s kind of funny, in the pictures I stood out like a sore thumb,” said Champ. ‘‘They have a lot of national pride seeing a foreigner go through this whole ceremonial thing.”

Training in the birthplace of his art, Champ got to see the conventional use of the discipline, as well as how it is used non-lethally with the Malaysian military police. His entire journey was capped with an exhibition match between Champ and the current national champion.

Arriving to the country after a 26-hour flight, it was only a matter of time before he was out in the jungle, training with the masters. He performed several tests of confidence, testing his strength as well as his endurance.

‘‘There are all these tests of strength, faith, and endurance,” said Champ. ‘‘They love seeing a foreigner go through it. They hold it as a sacred treasure; this is the most exposure they’ve had for hundreds of years, and they wanted to show that it’s made its way over to America.”

Going into the training with the knowledge that it would be difficult, Champ was glad he had his military training behind him.

‘‘Honestly, the military gives you this mentality,” said Champ. “Even with all of the years of martial arts training, I think being in the military enabled me to do way better than I ever would have in the past because it instills in you this certain attitude.”

After his training and demonstrations were complete, he moved on to Pusat Latihan Polis (PULAPOL), the Malaysian Police Training Center, to see how it has adjusted to a non-lethal, tournament setting.

‘‘It was pretty awesome,” said Champ.

During his entire visit in Malaysia, Champ was followed by the cameras, the spotlight on him and his experience.

‘‘We filmed up until the evening before I left. There is not a bit of film without me unfortunately,” joked Champ.

Over the course of his two weeks in Malaysia, Champ learned a lot and developed himself mentally, physically, and spiritually. Champ felt that his experience developed him as a Sailor as well.

‘‘Honestly a lot of the core value things that the Navy teaches go hand in hand with Silat Seni Gayong,” said Champ.

After getting back, his life returned to normal, standing guard at his post at the Academy. Champ said that the experience was definitely one of the highlights of his career and his life thus far, and he’s glad he did it.

‘‘Even if people forget about it the day after it airs, I’m glad I made a mark in history. I think it’s cool to know that the Navy is attached to it as well,” said Champ. ‘‘Especially during a time of war, and with all of the negative connotations in the media, I’m glad I can shed some positive light on the military.”